Community basketball courts as a model for schools 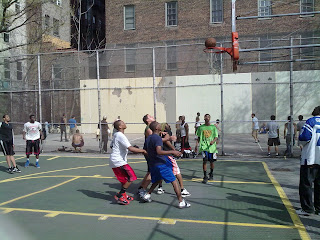 About two months ago, Provo City opened it's new Community Recreation Center.  It is a fantastic facility.  It's well designed, has state of the art equipment, is located in the heart of the city, and is a great value (a 12 month pass for my family was just under $400).  On average, I visit the rec center about once a week, mostly to use the fitness center.  To get to the fitness center, I have to walk by the four basketball courts located on the main level of the facility.

For me, they are one of the most interesting features of center, because in some sense, they have given rise to their own mini-community.  I realized this last week when it occurred to me that nearly every time I walk by the basketball courts, I see a young man from my neighborhood there playing basketball.  Sometimes he is there alone, other times he is playing one-on-one with a friend, and on other days he is in the middle of a pick-up game with a little larger group.

But, the biggest thing I've noticed about him is how much his game has improved in the last six months.  I know this because last winter, I saw him playing basketball in our church one night and, to put it bluntly, he was awful.  He couldn't make anything further than four feet from the basket, he missed half the lay-ups he took, and it was painful to watch his jumpshot.

When I saw him last week, he was by no means ready for the Timpview HS basketball team, but he was holding his own against a group of average guys his same age.  He even "looked" like a basketball player--he wore the basketball shoes you'd expect from a relatively serious player, had on the long basketball shorts that you see when you watch an NBA game, and even had the same type of socks I know HS basketball players wear.  It was like he had been enrolled in some kind of basketball school where they taught him how to shoot a jumpshot, how to play defense in the low post (he's a pretty tall kid for his age), and even how to dress.  In fact, he has been in "school," just a different type of school than what we typically think of.

While, I highly doubt that Provo City designed the basketball complex to facilitate learning, it has a number of features that make it a great place where learning (basketball-specific learning) can take place.  It's a lot like the neighborhood boxing gym or skateboard park in that it brings together a mini-community of people who are all interested in and engaged in the same activity, but who all possess varying degrees of skill and experience.  And, any organization who cares about how its members learn could take a few cues:

1.  A focus on authentic learning.  The kids and adults who play basketball at the rec center aren't participating in artificial drills, practice sessions, or contrived activities.  For the most part, they are engaged in real basketball games that allow them to participate in all of the aspects of the game of basketball from conditioning, to shooting, to defense, to rebounding.  So, each time they play, they're developing the full range of their game.  In addition, real games are much more motivating than artificial activities, which impacts learning and development more than nearly any other factor in the learning environment.

2.  Openness and opportunities to watch other learners in practice.  The three full-size courts in the complex are located next to one another in a large open space, without any dividing walls.  Additionally, there is an elevated track above the courts, and glass windows looking into the three-court complex.  Although the fourth court (a smaller one) is separated from the other three by a thin wall, it is next door, and also surrounded by glass windows.  This all means, that regardless of what court I'm playing on, I can see what's going on in the games next to me.  This is particularly critical for novice players because it means they have the potential to watch more advanced players in the game next to them.  So, a young player can see what good defense looks like, watch a reverse lay-up, or stand in awe at a smooth jumper.  In essence, it provides a novice with access to a wide range of practices within the community.  That access and the observational opportunities that come with it are invaluable for novice learners.

3.  Learners of various skill level together in the same space.  Because of the open design of the basketball complex and that fact that anyone can use it, there is a wide range of basketball ability represented on the courts at any one time.  Just last week when I was there, I saw one game being played by middle-aged men, another game made up of kids from the age of 10 - 15, and a Dad and his three kids playing on another court.  Again, this mix of ability levels means that new basketball players are likely to be playing right next to advanced players, which provides great opportunities for learning.  And, in addition to providing benefit to novices, it may even provide mentoring opportunities for veterans or "experts" looking to give back.

The take home message here is that learning is inherently a social enterprise that occurs most effectively when it becomes a community activity.  However, much of the formal learning that takes place in schools looks very different than the kind of learning I've described above.  Instead of being based in community, where learners from varying skill levels come together and watch, learn, and participate together, it is terribly fragmented.  It happens in isolated classrooms, where everyone has the same relative degree of knowledge or skill, and is rarely authentic in the ways we hope it would.

So, what would a school look like if it were patterned after a boxing gym, a basketball complex, or a skate park?  Could it work?  And, how would it be administered?