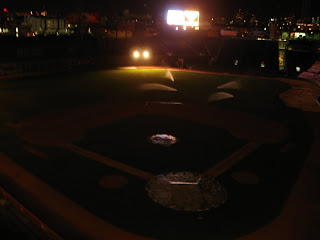 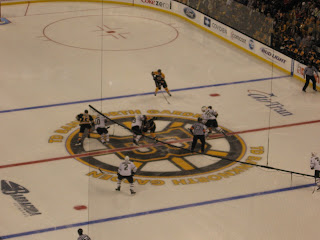 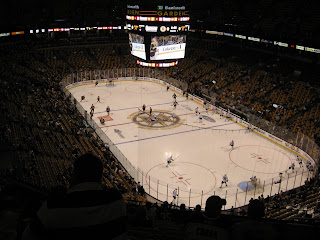 So, within the last 24 hours I have visited two of the most historic sports venues in the world--the Boston Garden (now known as the TD Banknorth Garden) and Fenway park.  I thought I would post a couple of pictures so you could see a little bit of what I saw.  The Garden was amazing.  I've never been at a sporting event with more energy and this was a regular season game that was never even very close.  Boston was up 5-1 late in the 3rd Period but the fans stuck around and were as loud then as at any point in the game.  I felt like it was an "experience" rather than just watching a game.  I also sat next to some season ticket holders which gave everything a very authentic feel (I think I heard more f-bombs in those 3 hours than I probably have my whole life).
Fenway was just about as cool.  We got a personal tour and then got to have dinner up in one of the lounge areas (all we could eat dogs, sliders, fried mozarella, and dessert, plus drinks).  They were doing some renovation of the seats in the infield area so we didn't get to see much down there and they didn't have the field lights on, but I managed to sneak down onto the infield area and stood right behind home plate which was pretty cool.  Both the Garden & Fenway were much smaller than I expected.  It gives a really intimate feel to being there, like you're part of an elite club that most people never really get to experience.
Hope you enjoy the pictures
Posted by Unknown at 5:27 PM